The F2G board is designed to convert a FPGA Mezzanine Card(FMC) or FPGA Mezzanine Card Plus(FMC+) interface to four 2x20pin expansion prototype(GPIO) headers. Users can connect up to four GPIO headers onto a FMC-interfaced host board via a F2G board.

Note : the I/O Pin of the GPIO header is directly connected to the I/O of the FMC connector and has not been converted by any level translator. Therefore, the I / O standard of the GPIO header depends on the voltage settings on the FPGA maina board.

Figure 1-1 shows a photograph of the F2G package. 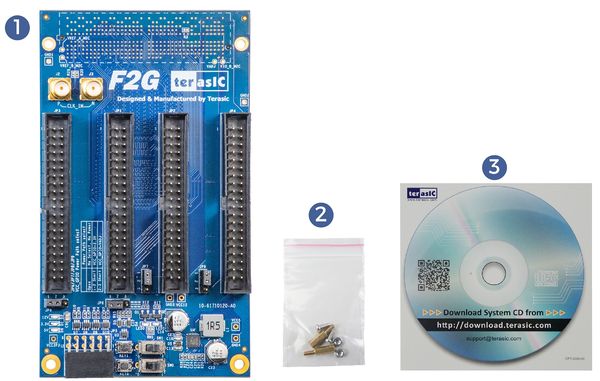 Figure 1-2 shows the photo of a F2G board. The important functions of the F2G are listed below: 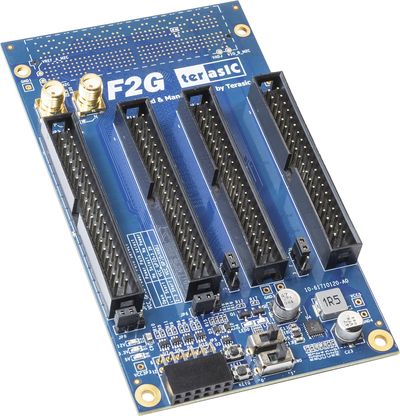 Figure 1‑2 The picture of a F2G board

This section presents the features and design characteristics of the board. A photograph of the board is shown in Figure 1-3 and Figure 1-4. It depicts the layout of the board and indicates the location of the connectors and key components.

Figure 1-5 gives the block diagram of the board. According to the FMC Vita 57 specification, the FMC connector can be divided into two specifications by I/O pin numbers: high pin count and low pin count. Therefore, in the figure, we list 3 groups I/O pin in the FMC connector such as LA, HA and HB. Pins with a L prefix (LA) shall have connector contacts populated in the low-pin and high-pin count connectors.

Pins with a H prefix (HA and HB) shall have connector contacts populated only in the high-pin count connector. This will allow users to understand which F2G board interfaces can be used for their FPGA maina board. 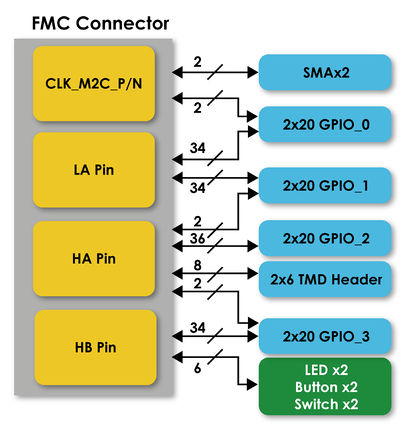 Figure 1‑5 Block diagram of the F2G board

Figure 1-6 is the Mechanical Layout of F2G board. Figure 1‑6 Mechanical Layout of the F2G board

In order to make the F2G card and the FMC connector on the FMC card with more secure hookup, the FMC side of the F2G card has reserved two screw holes, as shown in Figure 1-7. Users can use the screws, copper pillars, and nuts that come with the F2G, to secure the F2G on the FPGA main board, as shown in Figure 1-8. Because transceiver is mostly used for high-speed transmission applications, we strongly recommend that users use the screws to secure the connection between the FPGA main board and the F2G card. 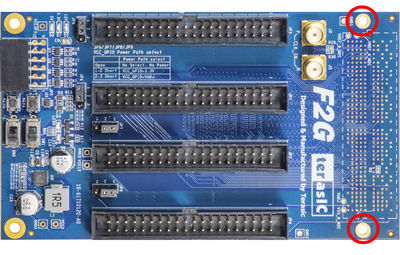 Figure 1‑5 The two screw holes on F2G board Figure 1‑5 Secure the F2g on the FPGA main board

Contact us via the following methods for further technical assistance:

This chapter provides instructions to use the board and the peripherals description.

The 2x20 GPIO header is the most important interface on the F2G board. Most of the pins on the GPIO header is directly connected to the FMC connector, allowing users to convert the FPGA I/O on the main board from FMC connector to 2.54mm GPIO header pin, which is more convenient to develop and debug.

Pin Out Of the GPIO Header 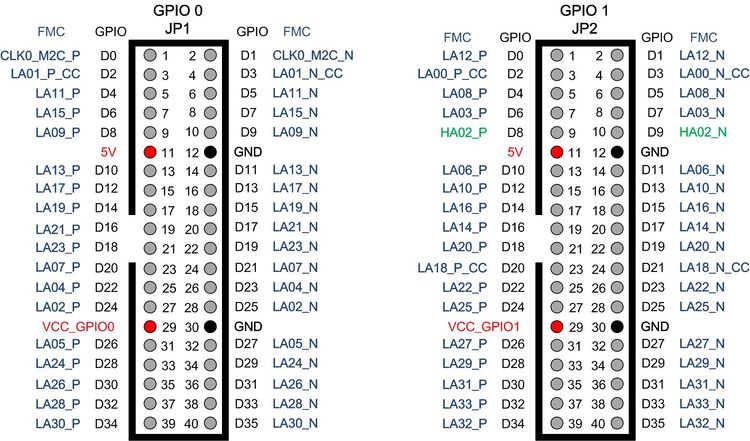 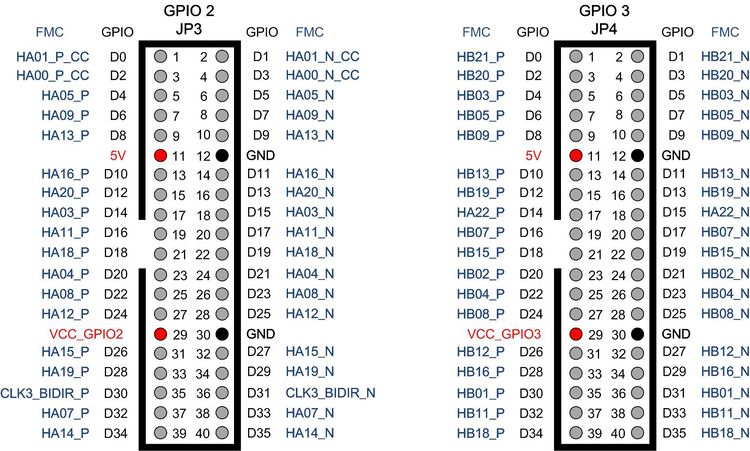 I/O standard of the GPIO headers

Because the GPIO header is directly connected to the I/O of the FMC connector and has not been converted by any level translator. Therefore, the I / O standard of the GPIO header depends on the voltage settings on the FPGA maina board. So, before using or connecting any circuit to the GPIO header, please check whether the logic level matches the FPGA main board.

Support status for HPC and LPC of FMC connector

The number of pin I / O of the FMC connector is divided into two specifications: high pin count(HPC) and low pin count(LPC). As shown in Figure 1-5, If the FMC connector on the user's main board is low pin count, type, you can only use the two headers : GPIO_0 and GPIO1 on F2G board. It should be noted that there are two I / O(GPIO_1_D8 and GPIO_1_D9) on GPIO_1 that are connected to the pin group of high pin count, so these two I/O will also be unavailable(See Figure 2-2). If the user's main board is HPC type, the four GPIO headers on F2G board are all can be used.

In addition, it should be noted that many FPGA maina board may place some terminal resistors on the FMC I/O for differential I/O standard or clock I/O. To use the GPIO header pin on F2G, you may need to remove these resistors between the I/O first to avoid interfere with each other. For example, GPIO_0_D0/GPIO_0_D1 on GPIO_0 header are connected to the CLK0_M2C_P/CLK0_M2C_N pin of the FMC connector. On many FPGA main boards, a terminal resistor may be reserved for this pair of I/O. If users want to use both GPIO_0_D0 and GPIO_0_D1, you may need to check and remove the resistance on the main board first to avoid the two I/O interfere with each other. for more examples, please refer to Section 2-5.

Pin Mappings for GPIO and FMC

Note: The following header is not to adjust the i/o stadnard of the GPIO pin, but to adjust the voltage level fo the power pin (Pin 29) on the connector.

On the F2G board, user can choose to provide 3.3V or VADJ (from maina board through FMC) on the pin 29 of the GPIO header via 3-pin header. For example, pin 29 on GPIO0 is VCC_GPIO0, and this power is controlled by JP6. If pin1 and pin2 of JP6 are short-circuited, then VCC_GPIO0 will be 3.3V. If short Pin 2 and Pin3, VCC_GPIO0 will be VADJ. The default setting of all the 3-pin header is short pin 1 and 2, i.e. 3.3V is provided. The control header corresponding to each GPIO header is shown in Table 2-1. Figure 2‑4 pin-outs of the TMD header 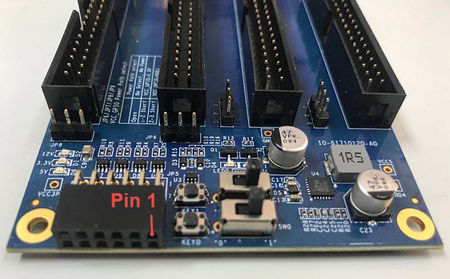 Table 2‑7 pin mappings of the Push-buttons

Table 2‑9 pin mappings of the LEDs

Note that user I/Os such as Push-buttons, Switches and LEDs are connected to the FMC connector's HB group pin, so if the FMC connector of user's FPGA main board is a low pin count type, these interfaces will not be available.

A pair of SMA connectors are provided on the F2G board so that users can input differenteantial or single-end clock into the FPGA main board through these pair of connectors. It should be noted that the SMA connector and FMC connector are directly connected, so the input clock I/O Standard needs to match the settings of the main board. Table 2-10 give the pin mapping of the SMA connectors.

Table 2‑7 pin mappings of the Push-buttons

This section will introduce the support status and important notes when using F2G board on the Terasic FPGA main board with FMC connector. As shown in Table 2-8, we list which interface on the F2G board can be used when the F2G board is connected to Terasic's TR5 (Stratix V), HAN Pilot Platform (Arria 10) and Apollo S10 (Stratix 10). Also it will list some notes for some special pins.

Similarly, when the F2G is connected to TR5's FMC-D connector, R279 resistor needs to be removed;

*Note4 : The SMA connectors on the F2G board is mainly designed to input the clock to the FPGA main board, but not every FPGA main board connects this pair of clock signal to the dedicated clock pin for FPGA. On TR5 board, these two clock signal on the FMC connectors FMC-A and FMC-C don't be connected to the dedicated clock pins. If users connect F2G to these two FMC connectors, they can only use this pair of SMA connector as ordinary I/O. 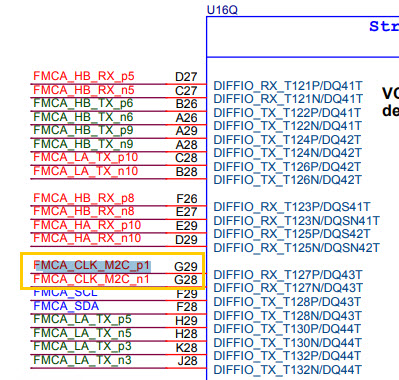 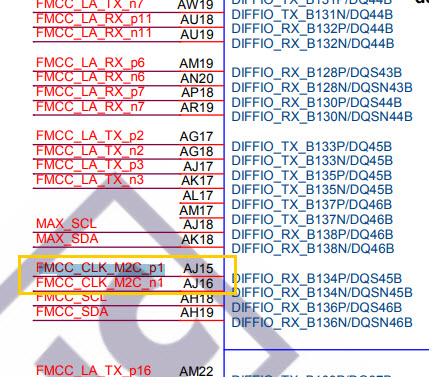 2-5 Support status for other FMC main board

2-7 Pin out of the FMC connector

Table 2-9 gives the pin out of the FMC connector.

Table 2‑9 pin out of the FMC connector
Retrieved from "http://www.terasic.com.tw/wiki/F2G_User_Manual"