Spotlight of Maker Faire: Solving Rubik’s Cube Within a Minute! 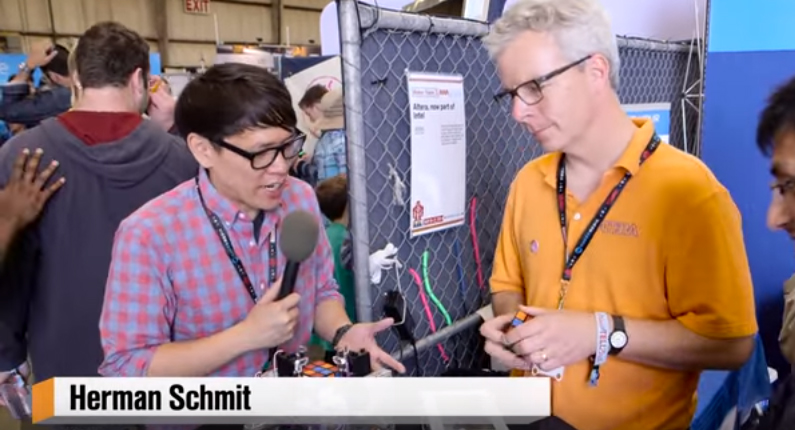 Norm:   Hi Everybody, Norm from “Tested” here at Maker Faire 2016 and this seems like the right place to find a Rubik's cube solving robot here at the Altera Booth. This is Herman. How’re you doing Herman?

Norm: So I want to learn about how you guys make this work and how to use some of your technology. First of all, for people who may not know, what is Altera and what do you guys make?

Herman: Ok, so Altera makes FPGAs which stands for field programmable gate arrays. It’s basically a huge platform of unprogrammed silicon, right? Unprogram digital logic which you can configure out of the box to do whatever you want. So you know in the past years we’ve had brought little breadboards, you know people are familiar with them, and we said basically within one of these chips, we’ve got like 10 square yards worth of bread board area which you can mess around with and you can instantiated and configure anything you want.

Norm: Much lower level than what other people use to when they’re working with libraries and api’s and you can optimize for a lot to do really complex things like build high-speed cameras or all sorts of computer techs.

Herman: That’s right. I mean this system is trying to illustrate, I think, sort of the diversity of things that you can do with an FPGA. It’s doing image processing. It’s doing some deep computation, actually trying to solve the Rubik's cube algorithmically and then it’s doing the motor control, that actually, you know, turn the cube and get it to the solution.

Norm: Well, you guys don’t just make the boards; you also use it and implement it in fun ways in your spare time on projects like this. So can you run me through exactly what’s going on here and how this whole setup is assembled?

Herman: Yeah! So the setup is based on, I guess, 8 total servos, and basically for its set up as a linear actuator so that it can close on and remove the different actuators, and then just two pairs to do rotations. I think the lighting LED on the bottom is to try and you know regardless of what lighting is present create the same lighting so we can detect the colors from the video camera. And all of that get uploaded into the Cyclone V SoC chip. You actually have to go through this step of confirming what the colors are. So there’s a little bit of manual intervention here. It’s not perfectly bug-free. And then when you hit the button when it’s made the solution, you can watch it actuate and actually turn the Rubik cube’s solved version.

Norm: Which is a beautiful thing to watch unfold.

Herman: Yeah, dramatically its nice because it pulls back after it’s finished and it just drops it down, you know, it’s like,  Rubik's cube out.

Terasic Rubik’s Cube Solving Robot is controlled by the DE1-SoC board, and uses Multi-Touch LCD Module (MTL2 ) as its HMI.

The DE1-SoC is a robust hardware design platform built around the Altera SoC FPGA which combines dual-core Cortex-A9 embedded processor and integrates an ARM-based hard processor system (HPS) consisting of processors, peripherals and memory interfaces tied seamlessly with the FPGA fabric using a high-bandwidth interconnect backbone. The DE1-SoC development board includes peripherals such as high-speed DDR3 memory, video and audio interfaces, Ethernet networking, and much more. 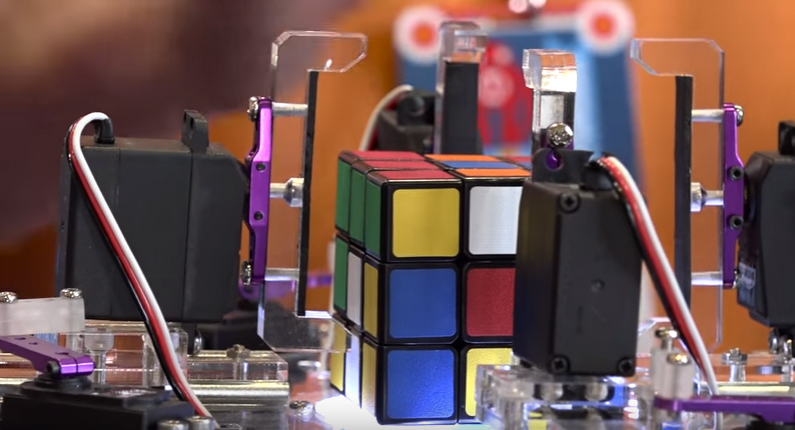 The Terasic Multi-Touch LCD Module Second Edition (MTL2 ) is an all-purpose capacitive touch-screen for your FPGA applications. It provides 5-point multi-touch support and a 7" color display LCD with 800x480 resolution. An IDE cable with an IDE-to-GPIO adapter (ITG) is provided in the kit for the MTL2 to interface with various Terasic FPGA development boards through a 2x20 GPIO interface.

Terasic also has launched a six-legged robot kit named Spider and a line following robot kit named A-Cute Car. Our rich teaching equipment and complete after-sales service will be the best choice for training and education.